Chapter 8
Night crept in over the city of Gallador.  The moon rose slowly as dusk settled into full darkness.  The moon cast eerie shadows all across the city.  The creeping darkness fell listlessly upon the cold cobblestone streets.  Dark shadows danced merrily from the street lamps that had been lit by the night watch.  They failed to adequately lend any semblance of security to the city at night.
As the regular inhabitants lay down for the evening, its darker, seamier side awoke.  It was a dark side that most cities have, but never want to admit to.
Along with the city’s other evening dwellers, two black clad shadows worked their way up the side of a building.  They hid in the murky blackness while they used a small, finely crafted rope and grappling hook to scale its heights.  The hook had been thrown quietly up to the roof where it had easily grabbed a ledge.  The two figures expertly went up the thin cord.  They stopped just below the roof, right in front of a closed window.
They paused briefly in front of the window.  The first figure pulled out a small, curious looking metal tool from the back of a sash that was tied about its waist.  The figure reached up to the window and slid the tool into the gap between the window’s two doors, easing it gently upward.  The latch came up off its catch, and then gently swung the window open with only a faint click.
The first figure carefully eased the window open and then dropped, cat-like, down onto the wooden floor of the small room.  The figure made no sound as it moved very slowly to the right side of the window, making room for its companion to enter. 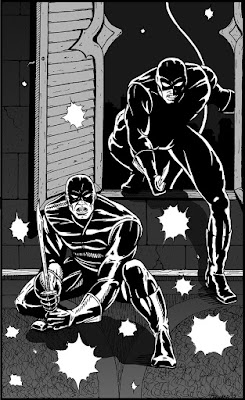 As the first figure turned and moved to the right of the window, it felt something brush lightly against its ankle.  Suddenly there was a loud crack and a burst of brilliant white light.  The first figure cried out and was blinded.  The second figure, still perched on the windowsill, drew back as the light exploded right in front of them.  The bright flash caused the figure to lose its grip on the sill and rope, falling backward into the night.  The figure only let out a small gasp as it fell.
The sound and sudden light woke Jair with a start.  He turned and quickly rolled off the bed, kneeling beside it.  He looked around to see what had set off the alarm.  As the light faded, Jair saw that he was not alone.  He paused long enough to grab his dagger and the satchel, and then backed toward the door.
The black clad figure shook its head to clear its vision, but heard Jair moving toward the door.  The figure quickly pulled out a wicked looking short sword that had been strapped to it’s back. The intruder waved the sword menacingly in Jair’s direction.  Jair noticed the intruder’s hesitation and concluded that it was still partially blinded from the spell.
Jair drew back his arm and threw the satchel at the intruder.  He followed the satchel by lunging toward the intruder with his dagger.  The satchel caught the intruder in the chest, making a loud thud as it hit.  This caused the intruder to drop his sword, which gave Jair the opportunity to come in low with his dagger.  He did this in the hope that he could take the intruder down before he had time to recover.
Jair thrust forward with his dagger.  It felt as if his weapon had a life of its own, guiding his hand toward his opponent.  He caught the intruder in the lower abdomen, sinking his blade it in to the hilt.  His successful attack caused the intruder to let out a loud grunt, but didn’t immediately stop him.  Jair grappled with the figure for several moments, twisting his blade until the intruder finally relaxed its grip.  He slowly slid off the blade, falling limply to the floor.