Adam was daydreaming a little when he thought he caught movement out of the corner of one eye. It was in one of the larger trees, not too far from him. He hoped it wasn’t more buzzards. He had forgotten to bring his gun with him. He casually scanned the area and tried to look up in the tree without seeming to look up in the tree. The breeze picked up a little and moved some of the branches out of the way. This revealed something that Adam was not expecting. At first, he thought he was seeing things. He closed his eyes for a moment and then reopened them to see if his vision cleared. What he had seen before was still there.
Adam casually looked around again and tried not to stare, but his gaze kept falling on the small figure that was partially obscured by the tree’s foliage. The figure was sitting on a thick limb high up in the tree. Not wanting the figure to know he had spotted it, Adam casually looked around again and pretended he hadn’t noticed it. After taking a few more quick glances, he realized that the figure was a small girl or woman.
She was sitting casually and had her legs crossed, dangling beneath the limb she was sitting on. Her small hands rested on the limb beneath her. When Adam looked at the girl again, she stared right back at him. She was of a slight build and was almost as tall as Adam. She had dark reddish brown skin, black hair that was pulled back into a ponytail and had small, slightly pointed ears. She was wearing some sort of brown leather woven tunic or dress. Feathers hung down from a band she wore around her forehead and she had shoes made from the same material as her dress. Her shoes came up above her ankles and had laces that crisscrossed all along the top. Leather fringe dangled all along the tops of her shoes. Her clothing was elaborate, but decorated in colors that blended in with the forest. She wore what looked to be a stone knife in a sheath at her belt. Its handle was wrapped in leather.
Adam tried to not look at the figure, but couldn’t help himself. He had never seen anyone quite like this before. Several minutes passed with him trying not to look at her. As he watched the figure, she stood on the limb and then abruptly jumped off of it. She landed on another limb far below the first one, but jumped off of this limb also. The distance the girl fell was astonishing to Adam. A normal person could not have fallen such a great distance without getting hurt.
It was a very long drop from the limbs to the ground. Adam guessed it to be almost thirty feet to the ground from where the figure had been sitting on the first limb. Adam was amazed at the feat. The small girl landed softly in a crouch just a little ways down the hill from where he was sitting on the rock. She had made no sound at all. She then stood and turned toward him and said, “You can see me, can you not?” 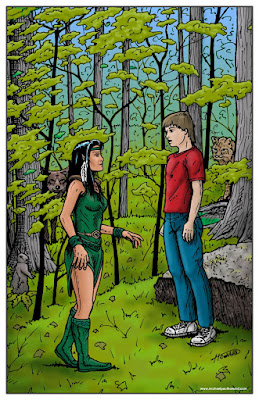 Adam nodded his head slowly. “Am I not supposed to?” He asked nervously. The small woman’s voice was almost musical when she spoke. She did not sound like a child, but did not sound quite like an adult either.
“No, most humans can not see us unless we want them to. It is rare for one of your people to be able to see us.” She told him as she moved up the hill toward him. She placed one hand on the hilt of her knife as she drew near. Adam felt a little threatened by her actions and the unusualness of it all. He also noticed that her movements were graceful and fluid. He stood up as she came closer to him. He tried to put the rock between them, but did not think it would do much good. He was ready to run if she tried to attack at him, but after seeing her jump, didn’t think he could outrun her.