The Ruby Helmet Excerpt I

Chapter 3
Everywhere upon the cold stone floor of the cave were piles of human bones.  A large, dark figure slowly picked its way over the grisly remains.  It moved silently, searching for the beast that lived there.  The beast had wrought terrible devastation and brought great loss to the surrounding area.
A foul, putrid stench of death and decay emanated from deep within the dark, dank catacombs in which the figure now transverse.  The smell caused the figure to reel with disgust.  Knowing the awful power of its enemy however, the figure shook its head to try and clear it so it could continue on.  This caused its long dark hair to shimmer slightly in the dim light.  Reflections flickered across the silvery, well-worn ornamental helmet it wore.
The figure’s upper body was covered in plate mail armor.  It glittered faintly from the few thin beams of light that filtered down into the mouth of the cavern.  The figure’s dark leather breaches and soft, high riding leather boots barely made a sound as it softly padded its way toward the ominous entrance to another, larger cavern.
In the figure’s strong muscular hands it held a large, heavy, double bladed battleaxe.  The axe was made of the finest steel crafted by dwarven blacksmiths in the Timgranok Mountains.  The axe shone with a faint, slightly visible silver glow.  This gave it an eerie appearance in the darkness. 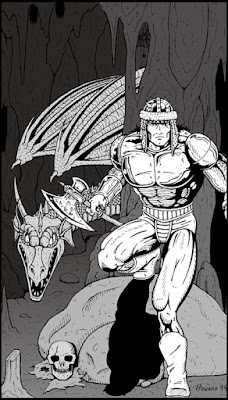